The Communist Party is redefining what it means to be Chinese

The Communist Party is redefining what it means to be Chinese 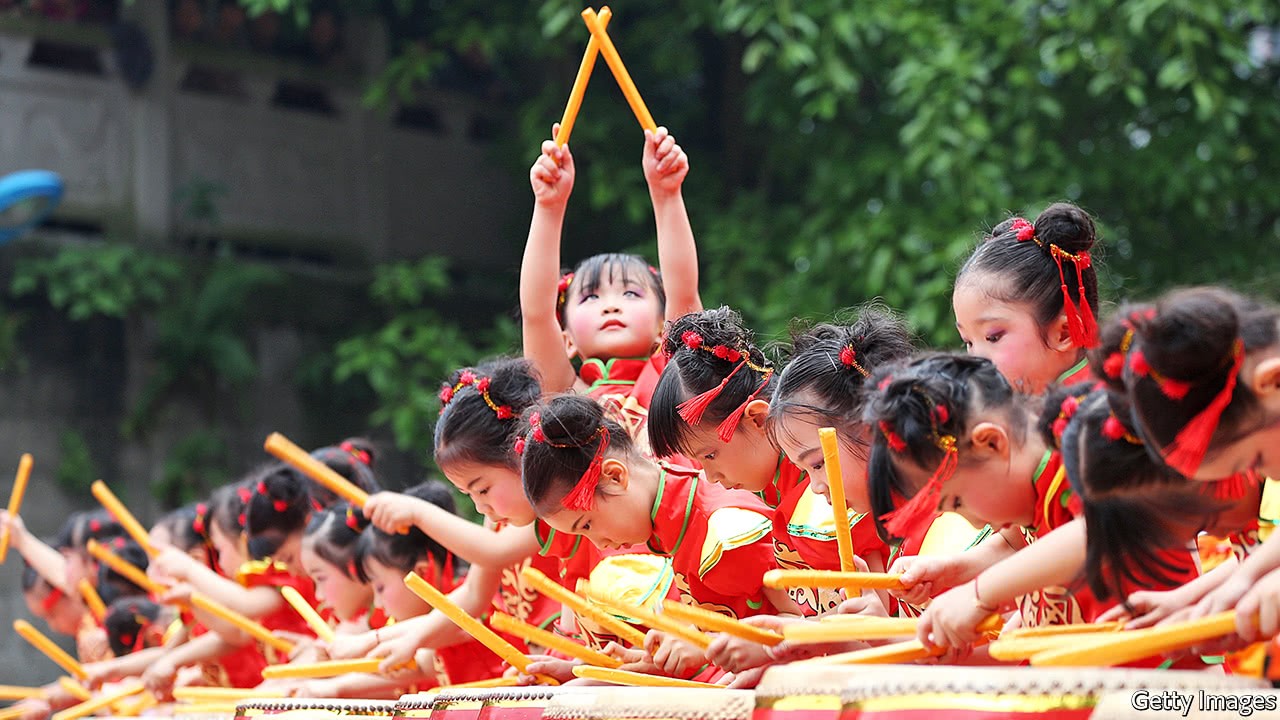 And is glossing over its own history of mauling Chinese culture

CHILDREN sit with straight backs chanting in loud voices from the Dizi Gui, a classic Chinese text about obedience. At the end of class they bow low to an image of Confucius, hands clasped as if in prayer. A statue of the ancient sage watches over the playground, too: “Study the Dizi Gui, be a good Chinese,” reads a red banner. At the Zhengde summer camp in Jinan, in the eastern province of Shandong, children as young as five spend their day reciting verses, learning tai chi and watching cartoons with moral messages. Phones are banned “to prevent contamination of the mind”, says Yi Shugui, the headmaster, a former management consultant. At similar summer schools across China children learn calligraphy, traditional Chinese crafts and how to play ancient instruments. China is undergoing a cultural renaissance, much of it government-sponsored.

For most of its history the Communist Party wanted to smash China’s past, not celebrate it. During the Cultural Revolution in the 1960s and 1970s it sought to overturn the “four olds”: old customs, old culture, old habits and old ideas. Temples, mansions and tombstones were ravaged, along with any artefacts or people associated with the bourgeois way of life. Small wonder that Communist ideology lost its appeal. The blistering pace of change in recent decades has kindled an anxiety that China is suffering from moral decay and a concomitant yearning for a revival of ancient values. The government is harnessing those feelings, using ancient rites and customs to spread favoured values.

Since coming to power in 2012 Xi Jinping, the president, has intensified efforts to build what he refers to as “cultural confidence”. In an extraordinary denial of its legacy, the Communist Party has taken to presenting itself as “the faithful heir” of traditional Chinese culture. “Our civilisation has developed in an unbroken line from ancient to modern times,” Mr Xi declared in 2012. In January the government sought to codify its attempts to “preserve” traditional culture by outlining a vast array of policies that local and national officials should advance.

Individual elements of the policy to promote “the integration of leisure life and traditional cultural development” sound rather benign. Taken together, however, they constitute an attempt to infuse daily life with a sanitised and government-sanctioned version of Chinese culture. The intention, as in so much that Mr Xi does, is to secure the enduring power of the Communist Party.

The agenda touches every aspect of life. The white paper calls for an emphasis on “our festivals”, so local and national holidays are being celebrated with new vigour. Some people are proposing that China should pick its own Mother’s Day, rather than copy the American date (China already has a native version of Valentine’s Day). State media are boosting the use of Chinese medicine when people fall ill, wearing Han robes when they get married, and keeping fit by practising tai chi and other ancient sports (a recent viral video lauds “Kung Fu Granny”, a 94-year-old who reckons she owes her longevity partly to such activities). The party is trying to bend popular culture to its agenda, too. On August 5th it announced plans to replace prime-time entertainment and reality TV shows that “hype” pop stars with programmes of higher “moral” content. Examples include a much-plugged quiz show about classical poetry and another in which children compete to write complicated Chinese characters.

Every part of society is being pressed into the effort. Zhengde is emblematic of a wider plan to influence Chinese youth, what the People’s Daily refers to as a “soul-casting project”, by introducing new school textbooks and degree programmes relating to ancient culture. Employers are encouraged to take their staff on study trips and provide classes on culture. Even the People’s Liberation Army has been told to seek courage from a lion-hearted hero of ancient China. So, either by directive or a desire to please officialdom, every art form is being given a Chinese twist: “King of Glory”, a popular game for mobile phones, features a famous eighth-century poet, Li Bai, albeit as an assassin, not a calling there is any evidence he pursued. A well-known Peking opera has been reinvented in jazz form to appeal to new audiences.

There is an economic logic to such policies, since they protect some Chinese firms from foreign competition and promote new sources of consumption. Last year Mr Xi urged a group of writers and artists to “draw energy from the treasure vault of Chinese culture”. Publishers have been asked to limit imports of foreign children’s books, thereby making way for home-grown comics and picture books that promote “Chinese values”.

In an effort to cut poverty and create new rural jobs, all manner of crafts have been revived or invented, including creating sculptures from peach stones and yams, weaving bamboo and, in one place, making miniature souvenir coffins. In April the government expressed the intention to develop cultural industries into a “pillar” of the economy. China’s ancient heritage stands at the centre of its sales pitch to the world, too: becoming “a socialist cultural superpower” is now an official national goal.

By presenting himself as the defender of traditional values, Mr Xi hopes to harness the conservative forces in society. He also seeks to divert attention from the party’s own culpability in creating the supposed spiritual vacuum. Traditional values bolster the Communist Party in other ways, too. Promoting the country’s cultural heritage is a safer source of patriotism than anti-Japanese feeling, which the party had been stoking for many years and which backfired in 2012 when demonstrations against Japan turned violent.

The Communist Party has cherry-picked the version of the past that suits it—what it refers to as a “correct” reflection of the ancient values prizing hierarchy, obedience and order. Preaching to a class of 12-18-year-olds at Zhengde, Mr Yi sums up Confucius’s teachings: “Listen to your parents at home, to your teachers at school, to your boss at work and to the state and government in the country—then you will have happiness.” That epitomises Mr Xi’s vision of a “harmonious society” nicely as well.

Inconvenient elements of China’s ancient culture have been left safely behind. Endorsing traditional values does not include a tolerance for religion, for example, which Mr Xi sees as a potential rival for citizens’ loyalty. While he preaches that ancient values are the “soul of the nation”, he has also overseen harsh moves against Tibetan Buddhists and Chinese Muslims. Monasteries throughout China have, in effect, been turned into tourist attractions. Many Buddhist temples charge entry fees and few host regular religious services or provide prayer books. Within weeks of the release of the white paper on preserving traditional culture came another edict forbidding even retired officials in Beijing from engaging in any religious activities. The Communist Party has clearly heeded one lesson from its own history: social movements, be they revolutionary, religious or democratic, may prove hard to contain. Better to control them itself.